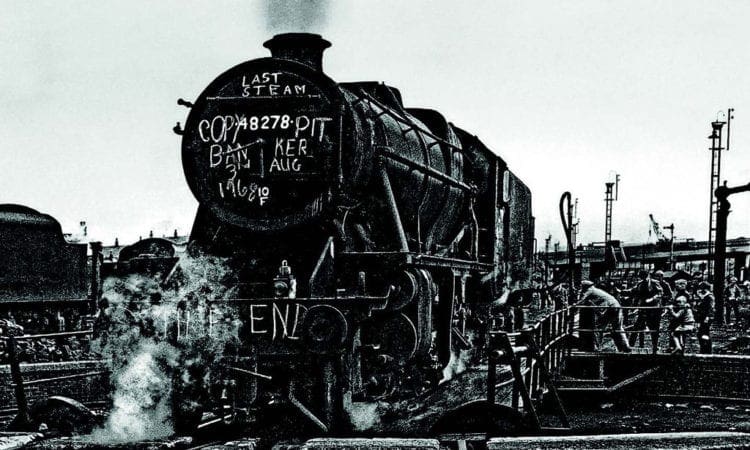 Sunday, August 4, 1968 – the day named by British Rail for the end of ‘normal’ steam – saw just two engines with a full head of steam at Rose Grove.

Immaculately turned-out No. 48773 was all set for the Blackburn-Hellifield- Carnforth leg of the Locomotive Club of Great Britain’s ‘Farewell to Steam Railtour’. A grimy No. 48519 was kept in steam, as standby.

It was also the only one of the final steam allocation to Rose Grove to have a new life in preservation. Rose Grove 8F No. 48493 was kept in steam at Lostock Hall until the Sunday morning, when at around 9am it shunted ballast wagons. This humble shift comprises the final non-passenger steam working on the British Rail standard gauge network.

However, that obscure ‘last’ working was all but overlooked by the army of enthusiasts who descended on the North West that weekend. Taking the limelight were the ‘Farewell to Steam’ specials, of which six ran through Lancashire at the same time.

Those seeking to spruce up the locomotives for the final day worked overtime, with 13 engines tackled, not only being cleaned, but with replacement self-adhesive smokebox numerals and shed plates affixed and buffer-beams painted.

Come the sunrise, the final curtain call for steam stood in the yard in all its majesty, reflecting the early morning sunlight. The Stephenson Locomotive Society booked two separate 10-coach trains (1Z78 and 1Z79) to run from Birmingham via Manchester Victoria, to Huddersfield, returning via Copy Pit, Blackburn, Bolton, Wigan and Rainford, where they were down for a 10-minute stop prior to both of them returning to Manchester and Stockport via Earlestown.

The Railway Correspondence & Travel Society organised its 13-coach special train, 1L50, to run from Euston to Skipton. After arriving at Manchester Victoria, it was scheduled for a trip via Rochdale, Castleton East Junction, Bury, Bolton, Blackburn and Hellifield, before arriving at Skipton.

It was then booked to run via Colne, Blackburn, Lostock Hall, Ormskirk, Bootle Junction and Rainhill, before returning to Manchester via Earlestown and Kenyon Junction.

The first stage between Manchester and Blackburn was worked by No. 48476 and No. 73069. It was then the turn of No. 45407 and No. 73069, also double-heading, to take the train forward to Hellifield and Skipton,  before then returning to Lostock Hall. No. 70013 Oliver Cromwell was then scheduled to work forwards via Ormskirk, Aintree and Rainhill, before returning via St Helens Junction and Earlestown to Manchester Victoria. Running late, RCTS officials asked Preston Control to allow the special to take a more direct route home, and so it ran from Lostock Hall Junction directly to Farington Junction and via Chorley and Bolton to Manchester.

The Locomotive Club of Great Britain had organised its own 12-coach rail-tour, 1Z74, from St Pancras to Carnforth, on a complicated route north of Manchester via Bolton, Blackburn, and Hellifield to Carnforth. From Manchester to

No. 45390 and No. 45025 double-headed on the leg returning from Carnforth as far as Farington Junction, However, because of the loss of paths caused by engineering works, No. 70013, heading 1Z74, was running late by three and a half hours, running low on water by the time Stockport was reached, and it was 2am on the supposedly steamless Monday that the train arrived four hours behind schedule, back in London. A local eight-coach railtour, 1T80, organised by a group under the banner  of GC Enterprises, ran from  Stockport to Carnforth and back behind No. 45156 Ayrshire Yeomanry.

The London Midland Region ran its own tour, 1T85, entitled ‘Last Days of Steam’, a comparatively simple and straightforward running from Manchester to Southport and back, leaving Manchester Victoria at 2.20pm and returning at 5.10pm. It ran outwards via Eccles, Olive Mount, the Bootle Branch, Birkdale and around the Southport avoiding line, and returned via Wigan (Wallgate), all behind No. 45305.

A few days earlier British Rail had staged a locomotive exhibition, including this ‘Black Five’, at Preston station. The last British Rail steam shunt turn occurred on August 4; Stanier 8F No. 48519 shunted wagons in Rose Grove yard. Also, sister No. 48519 was sent from the shed a short distance to Farington Junction Down Yard to perform a similar task, around the same time.

At Lostock Hall shed, No. 45156 was the last engine of all to return, appearing around 4am on the Monday. Driver Andy Hall, who backed his ‘Black Five’ into a deserted shed, and so claimed to have been the last steam footplateman on British Railways –apart from the special event on August 11, held a week after the official end of steam.

As he and his fireman walked away from their ‘Black Five’, they discovered the shed foreman’s office had been raided by souvenir hunters.

Enjoyed this snippet? It’s taken from the in-depth bookazine The End of Steam: Rail’s Seismic Summer of ’68.

As part of our superb Black Friday sale, The End of Steam is now available for 30% off – for this weekend only!

To get your discount, all you need to do is choose your favourite bookazine and add to your basket here. Then, go to View Basket and enter the discount code ‘BLKFR2’ into the promotional code box. Your 10% discount will be applied to all relevant items. It’s quick and simple!