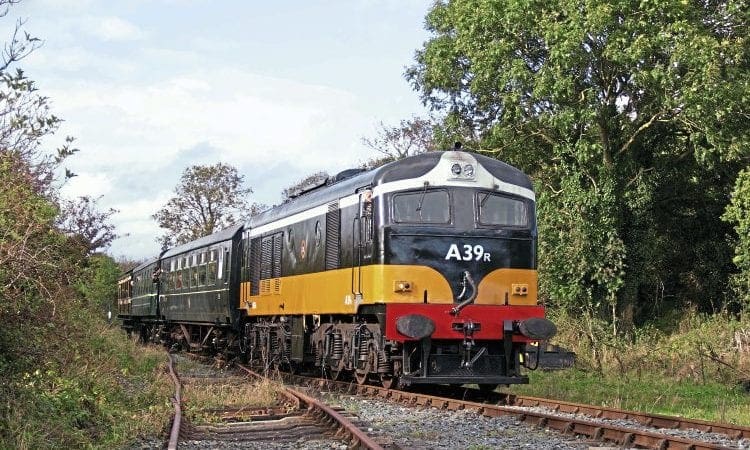 Visitors travelled from both sides of the border, and from across the Irish Sea, to join in the celebrations, which saw ITG stock in action on an intensive timetable between Downpatrick and Inch Abbey, and also to the Loop Platform, hauling DCDR rolling stock, including recently restored Park Royal carriage No. 1944.

A trio of ITG-owned locomotives was the main attraction for the day, namely Metro-Vicks A Class Co-Co No. A39R in black with orange stripe livery, C Class Bo-Bo No. C231 in original green livery, along with stalwart General Motors 141 Class No. 146 in Irish Rail livery.

The final member of the ITG fleet in action was the diminutive Deutz No. G617. The 1962-built loco is normally confined to shunting and works train duties at Downpatrick, but the diesel gala saw it propelled into the spotlight, hauling a three-carriage train to Inch Abbey, and making much blue smoke in the process.

At the start of the day, DCDR’s recently-restored two-car 80 Class set (Nos. 69+749) was on display at Downpatrick, although it was unable to carry passengers because of on-going repairs to the floor. The sight and sound of a 1970s-livery railcar set was quite an opener for the gala, as it thumped its way back to the sidings before the main event started.

Trains operated mainly to and from Inch Abbey through the afternoon, with spirited performances from all three ‘main line’ locomotives; drivers played to the crowd and made as much noise as possible within the overall 25mph speed limit.

Locomotives swapped at the end of each run to give variety, with several photo stops provided to enable lineside photography.

No. A39R had been out of service for engine overhaul for several years, and returned to front-line service just a few weeks before the gala, hauling trains in its black and orange livery for the first time.

No. C231 was hauling its first passenger trains since the 2014 gala, following rectification of a number of electrical and mechanical faults, which had been hampering its performance.

The ITG worked hard to provide a surprise at the end of the day, and the more astute enthusiasts will have spotted Nos. 146 and C231 being shunted together, and two drivers trying to look innocent when the passenger train passed.

With brakes and multi-working cable connected, the secret was out – the final train to Inch Abbey was to be hauled by No. C231 and No. 146, the first time in many years that a ‘B’ and ‘C’ had worked in multiple.