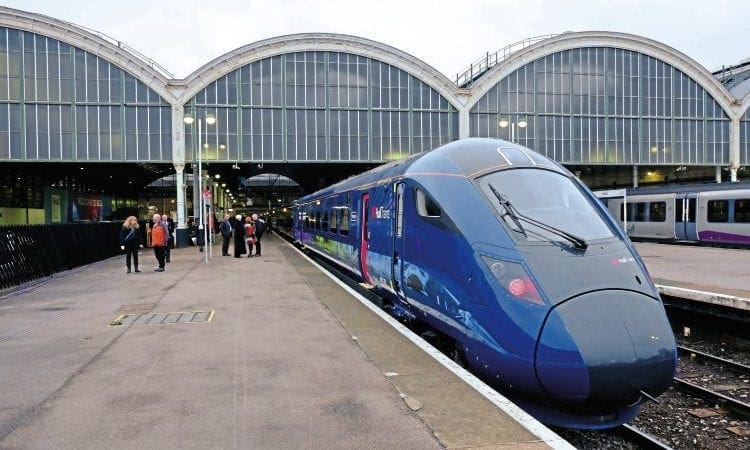 The First Group-owned open access operator confirmed that the bi-mode trains will be phased into passenger service over the next two months, releasing its ailing Class 180s for transfer to East Midlands Railway (EMR).

Although No. 802301 was stationary during the event, it offered a first opportunity for local stakeholders and the media to examine the five-car train, which was built by Hitachi Rail Europe’s Pistoia plant in Italy and financed by Angel Trains.

The trains are being delivered by rail across mainland Europe and via the Channel Tunnel to the UK.

Technically, the ‘Paragons’ are identical to the TransPennine Express (TPE) Class 802/2s, examples of which have been loaned to HT for staff training prior to the arrival of its own trains.

Standard features will include free wi-fi, an at-seat trolley service and complimentary hot and cold meals in First Class.

Unlike the ‘180s’, the new trains do not feature a cafe bar.

More than 25,000 sensors on each train provide real-time monitoring to Hitachi’s Bounds Green depot in London, which will maintain the fleet.

All five trains should be in passenger service by January, allowing HT to offer an extra 5,500 seats every week on its trains between Hull and London.

The operator plans to run to 10-car trains on its busiest ‘golden’ services in due course and add an extra Sunday service to cater for heavy demand at weekends.

HT managing director Louise Cheeseman told The RM: “It’s been a challenging 18 months, but these trains are a new beginning for us. This business needs and deserves these trains and the reliability they will bring.

“The people of Hull are very loyal and we want to repay that faith. We’re currently running at 91% seat occupancy, so we need the extra capacity of the ‘Paragons’.”

Next year marks the 20th anniversary of Hull Trains. To celebrate HT plans to name all five ‘Paragons’ after famous figures from Hull. On launch in 2000, Hull initially used Class 170s hired from Anglia Railways, before obtaining its own Class 170s and then moving on to a small fleet of 125mph Class 222s in 2005.

A wider re-organisation of train fleets saw the ‘222s’ move to Midland Mainline in 2008, with HT receiving Class 180s from First Great Western.

HT currently operates a fleet of four ex-GWR Class 180 DMUs, although on-going reliability issues have forced the hire of a short-formed HST set from GWR over the last year.