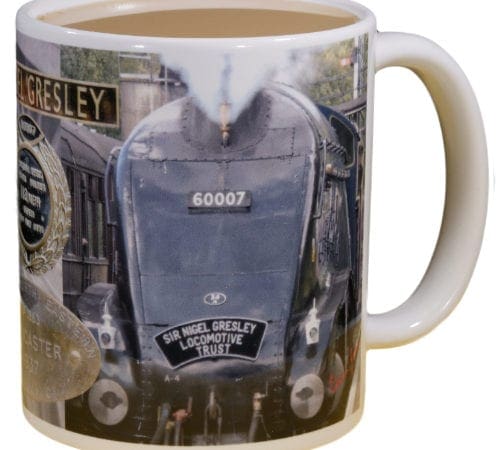 If you’re looking for a last-minute gift for a steam enthusiast or for yourself, then look no further than this splendid mug.

On 19th of September 2015, a few days before retiring for overhaul the LNER class A4 Sir Nigel Gresley made a last appearance at the North York Moors Railway in North Yorkshire, England.

Self-confessed to still be a teenager, 72-year-old John Edwin Skelton captured the 60007 steam whistleblowing at Grosmont station on the NYMR. A steam enthusiast since his early days he now lives in Slovakia where he teaches business English. One of his clients noticed his Sir Nigel Gresley poster and believed it would be an ideal image on a cup or mug.

A trial was produced in Bratislava with the results so good a second mug was immediately ordered. Jessops was then contacted in the UK who went on to produce a few mugs using the style Durham and Duroglaze finish which ensures the cup is dishwasher safe for 2000 Cycles Plus.

John joined the SNGL trust who approved of his design and the trust now receive a donation for every mug sold towards the locomotive’s overhaul.

It doesn’t matter which hand you use as the image is printed on both sides of the handle and when it has a hot drink in it the rising steam allows you to appreciate the feel the power of the locomotive.

Even in Slovakia John Skelton ensures his cupboard is stocked with a proper brew and will no longer drink anything but ‘Yorkshire Tea’ from any other mug.

The SNGL mug is available to buy now and also features the SNG nameplate, Doncaster shed works number and the A4 post-war speed record plaque.

Sir Nigel Gresley mugs can be ordered from York camera Mart 18 Church Street York yo1 8BE. Tel: 01904 642491. www.yorkcameramart.co.uk or john@inslovakia.sk