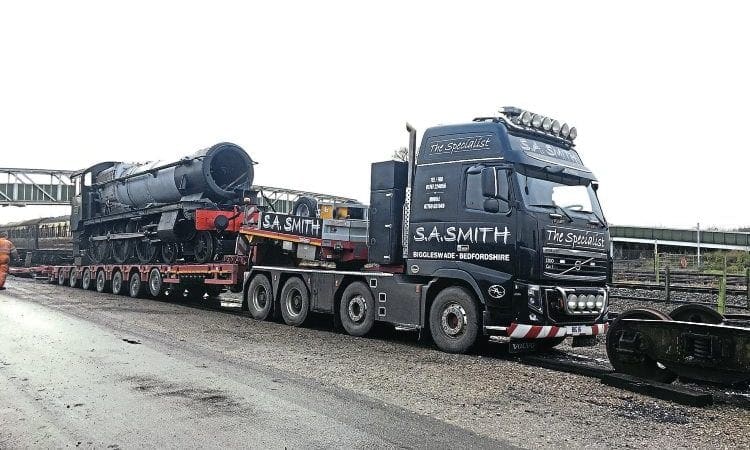 BUCKINGHAMSHIRE Railway Centre (BRC) is the official home to a pair of Hawksworth ‘Modified Hall’ 4-6-0s after adding semi-restored No. 6984 Owsden Hall to its list of resident locos.

The surprise news that owner Trevor Westbury was transferring No. 6984 from the Swindon & Cricklade Railway (S&CR) to Quainton was announced in mid-November, with the loco moving to its new home later in the month on November 25.

The 4-6-0 had been resident at Hayes Knoll since 2013 and had seen its restoration make great strides during the past five years under the S&CR engineering team led by Chris Denton.

Much of the bottom-end reassembly had been completed, including the motion, many cab fittings sourced or made and fitted, while the loco’s 4,000-gallon tender had also been finished.

This tender is currently paired with the BRC’s other ‘Modified Hall’ – No. 6989 Wightwick Hall – while work on the loco’s own tender progresses at Quainton.

A team from the BRC visited Hayes Knoll on November 9 to help reassemble the loco in anticipation of its move by road.

Once it reaches Quainton a full assessment of the outstanding work required to complete the restoration will be carried out. Much of this will focus on the boiler and be carried out by a third-party contractor.

However, the remaining work will be picked up by BRC volunteers, including those from the 6989 Restoration Group who successfully returned Wightwick Hall to steam a year ago, but only once No. 6989’s tender is finished.

A reunion between the two locos will have to wait until Wightwick Hall returns from its extended loan to the Battlefield Line, where it has been undergoing running-in.

The pair was allocated to Worcester shed in the late 1950s and during November and December 1959 alternated on the ‘Cambrian Coast Express’ between Shrewsbury and Wolverhampton.

Owsden Hall has yet to run in preservation, having left Woodham Brothers’ famous Barry Scrapyard in 1986.

For many years it was resident at the Gloucestershire Warwickshire Railway, but left Toddington in 2013 for the Swindon & Cricklade line, where the restoration was to be completed.