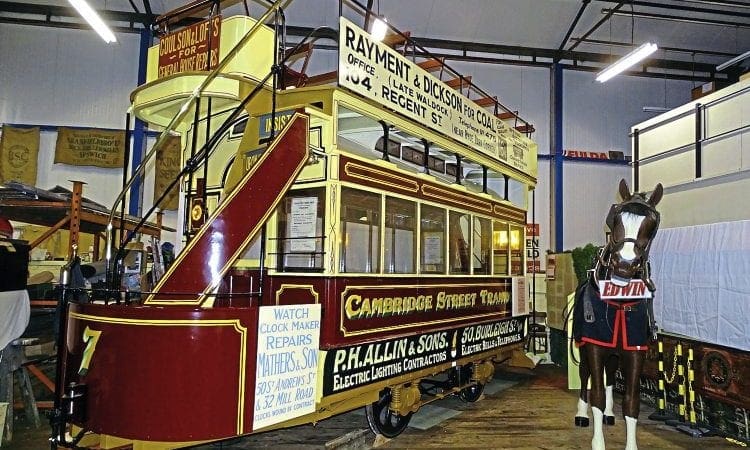 A FORMER Cambridge Street Tramways 4ft-gauge horse tram, which survived in Ely as a workshop for decades, has been returned to its former glory after a seven-year restoration by Ipswich Transport Museum.

Car No. 7 was originally built in 1880 as a single-deck horse tram by the Starbuck Car & Wagon Company of Birkenhead.

It spent its first five years working in Bath before transferring to Yorkshire, where it had an upper deck added for use on the steam-worked Bradford & Shelf Tramway system.

Research suggests it may have also worked in Shipley before reaching Cambridge in 1894.

After withdrawal in February 1914 the body was acquired by an Ely cobbler for use as a workshop, and survived remarkably intact until acquired by the museum in 2003.

Despite having no connections with Ipswich, the museum felt No. 7 suitably represented the Ipswich horse trams that ran from 1880 and 1904.

It is very similar in design and manufacture to those that ran in Ipswich, both having been manufactured by Starbucks in 1880.

Work on No. 7 got underway in 2012 after the museum had completed the restoration of Ipswich Corporation double-deck, open-top Brush car No. 33.

The project was supported by a £50,000 Heritage Lottery Fund grant, and initial efforts concentrated on identifying the tram. Careful rubbing down of the paintwork not only revealed the Cambridge Street Tramways livery beneath, but also several original signs and advertisements, too.

Consequently, it was decided to complete the tram in that livery, making it the only non-Ipswich vehicle in the museum.

More than 10,000 man hours have been expended on the restoration in the seven years since.

The project has not only seen the body fully restored (complete with painted adverts), but a new wooden underframe provided and the upper deck and associated staircases and metalwork re-created.

The completed tram will go on display in the main display area of the museum next year.