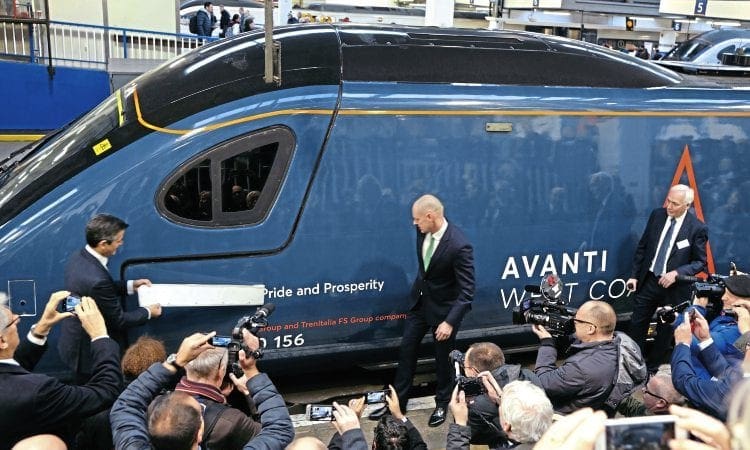 NEW trains, more services and a better customer experience are the priorities for Avanti West Coast (AWC), which replaced Virgin Trains on December 8.

First-Trenitalia’s West Coast Partnership joint venture will operate the country’s busiest inter-city railway until March 31, 2031, during which time it will also become the shadow operator for the first phase of High Speed 2 (HS2) services between Euston and Birmingham.

West Coast Partnership Development will design, develop and mobilise operations for the new railway working with HS2 Ltd and the Department for Transport, while Avanti will handle the day-to-day operation of the WCML.

Avanti, which means ‘Let’s Go’ or ‘Forward’ in Italian, has been chosen to symbolise progress and movement, while the new triangular logo represents the three geographic points of a network serving England, North Wales and Scotland.

December 9 saw the official launch of the new franchise with reliveried No. 390156 operating a special train from London Euston to Glasgow Central via Coventry, Birmingham International, Bescot, Stafford, Crewe, Preston and Carlisle.

Before departure, the 11-car EMU was named Pride and Prosperity by First Group managing director (MD) Matthew Gregory and Trenitalia MD Orazio Iacono at an event attended by the Italian Ambassador to the UK, Raffaele Trombetta.

The Class 390 fleet will undergo a refurbishment to ‘as-new’ condition, with 25,000 new seats, more reliable wi-fi, and power sockets for all passengers.

Most significantly, the refurbished ‘390s’ are expected to feature three classes of accommodation, with a new ‘Premium Economy’ category between standard and first.

By 2022, there will be 263 extra train services a week, including a new hourly service from London to Liverpool via the West Midlands. From December 2020, more trains will serve Motherwell and there will be later trains from Euston to Manchester on weekdays.

New destinations will include a daily train pair extended to Walsall from December 2020, a summer-dated Euston to Llandudno service starting in May 2021, and the extension of the daily Euston to Wrexham service to Gobowen from December 2022.

The latter date will also see the introduction of an additional return service to Shrewsbury, more trains calling at Milton Keynes Central, and earlier first trains and later last trains from Euston to Llandudno Junction and Chester.

Orazio Iacono, MD of Trenitalia, said: “We’re honoured to begin operating inter-city services on the West Coast Main Line, one of the busiest railways in Europe.

“Trenitalia will use its skills to help design and manage high-speed rail services from north to south in the UK over the next few years. Quality, dynamism, innovation and future: this is what we want to guarantee for the West Coast main line service.”

To ensure continuity between the franchises, management staff have transferred to the new owner, including Virgin Trains MD Phil Whittingham, who now holds the same position with AWC.

Over the course of its franchise, AWC will have to co-operate with Network Rail to integrate both HS2 and East-West Rail into the national network and collaborate with other industry bodies on major projects, including Crossrail 2, Euston Power Supply works, resignalling at Birmingham New Street, Crewe Hub, Northern Powerhouse Rail, and the TransPennine Route Upgrade.

Read more News and Features in the January 2020 issue of The Railway Magazine – on sale now!