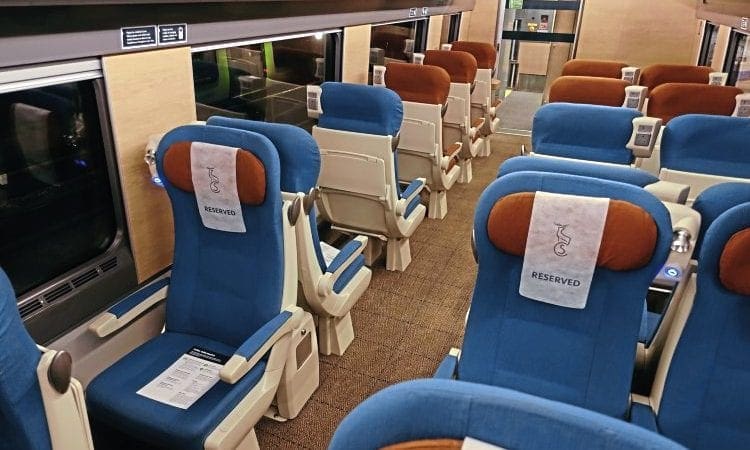 I HAD to travel to Glasgow at short notice and decided to try out the new Caledonian Sleeper stock. As there were no cabins available, I had to travel on one of the new ‘reclining’ seats.

My first impression was how fabulous the train looked, and inside the seating car layout was every bit First Class appearance, even with the 2+1 seating arrangement. The knee room was pretty good; I stress ‘knee’ room because, as I was to find out later, foot room was not.

Settled into my seat 30 minutes before departure, all seemed quite good at first, though the seat has poor back support.

Then, the train started to move and it was noticeable how the bogies made a lot of noise and continued all the way to Glasgow.

I then went to ‘recline’ in order to get some shut-eye – the whole point of the overnight journey. The seat swab moved forwards a couple of inches and that was it! The back was static and didn’t recline.

I noticed the guy opposite me kept looking all around the seat, imagining that it had stuck. Even in the reclined position, I was sitting so upright that if I used the shallow pillow I had brought with me, my head would not be resting on it with any gravity.

Trying to stretch out instead meant my feet were hitting the base of the hard seat in front of me (just above my ankles). The seats lack any ‘wings’ to lean your head against. The tray that dropped down from the back of the seat in front of me had no pocket or net or anything to put small items in, though there is a very small digital safe per seat to lock small valuables away on the luggage rack, but this meant getting up every time to use it. Far better to have a pocket at my level.

I had a look inside the lounge car to try and while away the long sleepless hours. My impression is it is a big improvement on previous converted Mk2 offerings. Food looked inexpensive too, though I didn’t try any.

Overall, I spent a very uncomfortable night, jiggling about on the bogies even though I was two-thirds into the carriage and not directly over one. Looking around, everybody was struggling to make themselves even half comfortable. One person even lay on the floor! It is quite misleading to claim the seats recline.

The nearest toilet was out of use, as so often seems to happen with accessible toilets on all varieties of train, so goodness knows what would happen if a wheelchair user was booked on board a journey lasting more than seven hours.

At 04.00 I went to freshen up in a toilet at the end of one of the sleeping cars. It was very small. The sink was under the usual apparatus of soap, water and dryer so I couldn’t lean over it while washing or cleaning my teeth.

Travelling home the following evening on a faster ‘Pendolino’, it struck me how comfortable the ride was and how quiet. The seat in First Class appears to adjust at least as much as on the sleeper, but that is for a shorter journey and is not for overnight.

I find it incredible that the latest design of sleeper is less stable and noisier than the previous Mk3s.

I recall a similar ride problem befell the Irish Rail Mk5s on the Dublin to Cork route a few years back and required modifications to the bogies retrospectively, and it could be further work needs to be carried out on the CAF sleepers too.

These trains are going to be around for at least 20 years, but they are in danger of losing the very market they are relying upon, those who travel overnight – and repeatedly.

The business case for the big investment in new rolling stock relies upon repeat usage, but I for one will not be tempted to travel on one again.

Readers have provided mixed views on the new sleeper stock, but similar bogie ‘activity’ has been reported on Class 195 and 331 units, so may be a manufacturing characteristic? – Ed.

Read more Letters, Opinion, News and Features in the January 2020 issue of The Railway Magazine – on sale now!