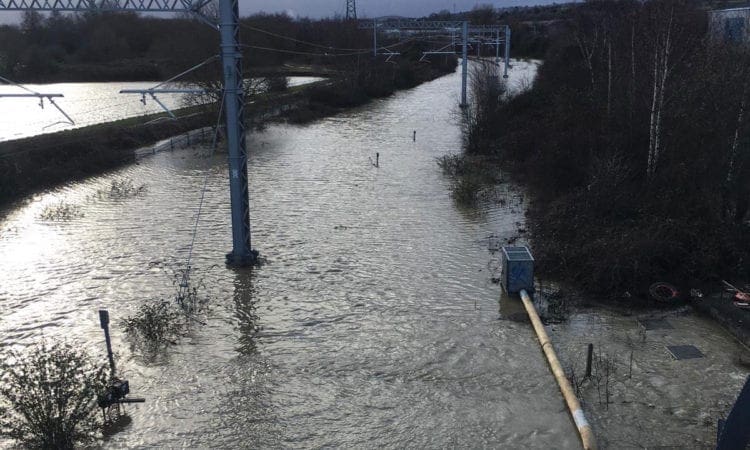 Storm Dennis is continuing to cause transport chaos as train lines and roads are blocked by flooding and fallen trees.

Network Rail is assessing the repairs needed to reopen parts of the railway damaged by torrential downpours and strong winds over the weekend.

No trains could run through Mitcham Junction, south London, as the electric third rail was switched off due to flooding.

A replacement bus service is in operation from Meadowhall and Swinton and passengers are being urged to check their journey before they travel.

A fault with the signalling system in the Welwyn Garden City area also caused major disruption to services between Stevenage and London Kings Cross.

Why are lines still closed?

Before the lines can reopen, the water levels will have to drop significantly and Network Rail engineers will need to carry out safety inspections.

Floodwater can dislodge ballast, the stones which support the track, and cause damage to lineside electrical equipment. Any debris which has washed up on the railway will also need to be removed.

All of this work will need to be completed before train services are able to resume in this area.

A Network Rail spokesman said: “Just as with Storm Ciara last weekend, Storm Dennis has had a significant impact on the railway.

“The heavy rainfall, combined with already waterlogged ground conditions, has led to flooding in a number of areas across the network. Our engineers have been working in extremely difficult conditions throughout Sunday and overnight to clear the tracks and keep passengers moving.

“The majority of services are now running as scheduled, but we do still urge anyone travelling over the next couple of days to check before they travel at www.nationalrailenquiries.co.uk.”

Surrey Police warned there would be “significant delays into the morning rush hour” as two out of three lanes of the A3 southbound between the M25 and Ockham were closed due to flood water from an adjacent field spilling onto the carriageway.

West Mercia Police urged motorists not to drive through flooded roads, warning that water levels are “still high in many areas across Shropshire”.

Passengers are strongly urged to check their journey before travelling which they can do via National Rail Enquiries or by visiting www.northernrailway.co.uk.