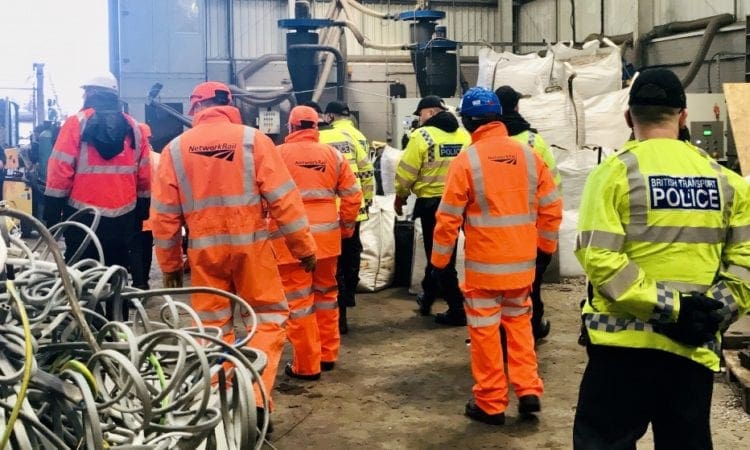 Scrap yards in Greater Manchester are being visited by Network Rail and the British Transport Police to ensure dealers are not trading stolen metal.

Latest figures reveal more than 400 incidents of metal theft on the railway between London Euston and Carlisle in the 12 months to January 2020.

This caused significant delays to passengers and cost the taxpayer an estimated £1.4m in Network Rail’s North West & Central Region.

Surprise scrap dealer site visits, in conjunction with the telecoms industry, have taken place in recent weeks to remind traders of their obligations under the Scrap Metal Dealers Act 2013.

By law, dealers must ensure traded metal is legally sourced and that sellers’ details are recorded and kept as part of any sale.

Thieves are being warned that police have sophisticated ways to catch them – with metal marked with a variety of trackable tags.

Andrea Graham, project manager for route crime performance initiatives at Network Rail, said: “Metal theft not only makes it harder to maintain our railway but causes significant problems for passengers too.

“To stop the trade of illegal scrap metal, dealers must be vigilant if offered materials which could have been illegally obtained.

“Trespassing on the railway is incredibly dangerous, as well as illegal. Thieves are not just risking a criminal record when they come onto the railway to commit crimes, but risking their lives too.”

“Our aim is to disrupt this criminal activity by targeting strategic points across the country.

“Anyone involved in the theft and trade of metal from the railway will be brought to justice. Cable theft on the rail system involves not only huge financial losses but causes hours of delays to millions of passengers. It is not a victimless crime.

“It is also extremely dangerous for those involved who put themselves at risk of serious injury and death by trespassing on lines.”

Rising copper prices led to changes in 2013, preventing cash sales of scrap metal as well as a local authority licencing scheme, however, dealers have found a workaround.

James Nattrass, Network Rail’s director of incident management and operational security explained how the infrastructure owner had adopted a greater focus on its operations. This meant greater emphasis on security around engineering works and planned possessions while working with private security contractors and the BTP.

Mr Nattrass added: “While not being complacent, we’ve seen significant signs of success. For period 9, cable theft is 60% down on the previous period, and 45% down against the same period in 2018.

“Network Rail works with the National Business Crime Group which includes utility companies, and we share information, advice and experience to good effect.”

While technological enhancements such as Smartwater have helped, this is not effective when cables have been stripped and cut into small chunks.

Another issue is where a fence is broken to access the railway. The cable is cut and found not to contain copper, and the offender walks away, leaving rail services disrupted until the severed point is located. There’s also an added risk that animals could get on the line via the damaged fence.

Anyone witnessing suspicious behaviour on or around the railway should report it to British Transport Police by calling 0800 40 50 40 or texting 61016.