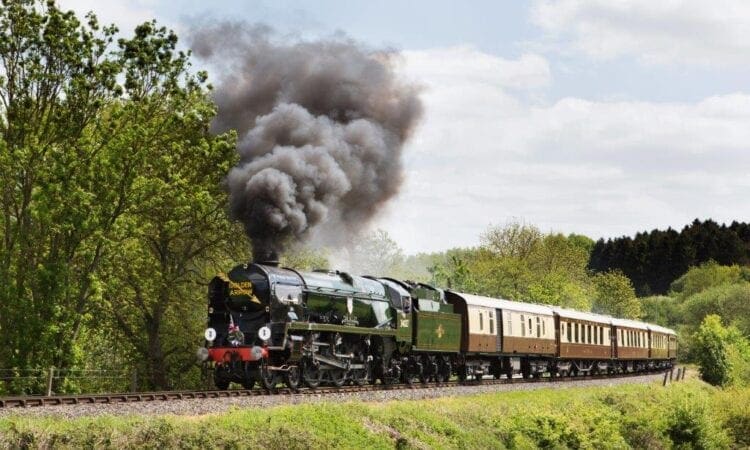 The Severn Valley Railway has reopened its virtual doors with the launch of its online shop, featuring a range of gifts for railway enthusiasts of all ages.

The heritage line has launched ‘Adopt-an-Engine’ packages which each come with a selection of exclusive merchandise alongside a certificate and glossy photograph of the chosen locomotive. With four levels of package, starting from £30 – Bronze, Silver, Gold and Platinum – there’s an option for all pockets and an engine for every interest.

Exclusively, the SVR has included the popular SR Bulleid Pacific No. 34027 Taw Valley amongst its selection of locomotives, thanks to the agreement and generosity of its owners. Everyone who buys the top level package for the engine will be entered into a prize draw for an once-in-a-lifetime VIP experience at the Severn Valley Railway.

It’s not just steam enthusiasts who are catered for – there’s also a selection of diesel locomotives available across the Severn Valley Railway fleet, including Class 50 No. 50033 Glorious and Class 14 D9551, plus Class 09s Nos. 09107 and D4100.

All proceeds from sales of ‘Adopt-an-Engine’ packages and other merchandise will be used to support the SVR’s Fight Back Fund, which has been set up to mitigate against the loss of income the railway is facing because of the ongoing pandemic closure.

Find out more and purchase your own ‘Adopt-an-Engine’ package by visiting www.svrshop.co.uk now.

It comes as the newly published issue of Heritage Railway magazine has devoted 10 feature pages to the Severn Valley Railway (SVR) during the line’s Golden anniversary year.

The SVR was due to celebrate the 50th anniversary of operating its first public trains this coming weekend – May 23-25. While the Covid-19 crisis has put paid to that, you can read the fascinating story of how the SVR came to be in a special six-page feature.

A two-page feature focuses on the pivotal role played by GWR 0-6-0 No. 3205 – the locomotive which hauled the SVR’s first public train on May 23, 1970. The sole-surviving 2251 Class is now based at the South Devon Railway. The magazine’s popular centrefold is also devoted to No. 3205.

You can purchase a single paper or digital copy of the issue from Mortons’ (publisher) online shop at: https://www.classicmagazines.co.uk/issue/View/issue/HR267 . Alternatively, you may wish to take advantage of the current subscription offer of six print issues for £15 (inc. P&P), which works out at just £2.50 per issue – or five digital issues for £9.99. Redeem the offer, which expires on June 30, at: https://classicmagazines.co.uk/promotion/hr232 .