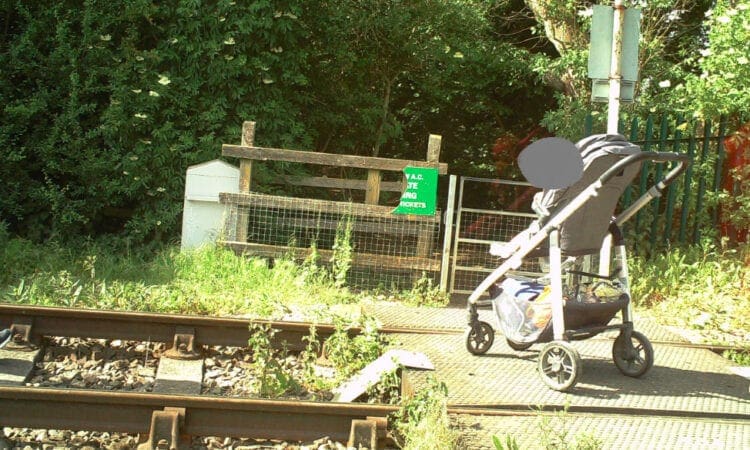 Network Rail and British Transport Police have joined forces to express concern at the rise in people risking their lives at level crossings – after a surge in people not using them correctly.

The trend includes on the Marlow branch line where 16 people have risked their life since March 23 – the start of the COVID-19 lockdown – with seven of those resulting in people almost being hit by a train.

One of the most shocking incidents took place on May 24 at Little Marlow, Buckinghamshire where a small child in a pushchair was left in the middle of the tracks so the adult with them could take a picture.

Another image at the same level crossing shows someone kneeling on the track while holding a dog, again so a picture could be taken.

Meanwhile a few miles away at Mill Lane level crossing, footage shows two people almost walk out in front of a moving train before rushing back to safety.

The warning for people not to risk their life comes as the number of services on the railway are starting to be increased with trains on some lines travelling up to 125mph with a stopping distance of more than a mile.

Mike Gallop, Network Rail’s Western route director, said: “It is shocking to see people unnecessarily risk their life and it is happening too often.

“When people lose their lives through not using level crossings correctly it’s tragic, not only for the families involved but also the drivers, passengers and wider communities.

“To do this it is essential that users take the time to stop, look and listen at the crossing, follow any guidance on the signage, avoid distractions and in particular, at Mill Lane, allow yourself plenty of time to cross avoiding going lineside while a train is in view.”

Rob Beveridge, ORR lead for footpath crossings on the Western Route said: “Great Britain’s level crossings, although among the safest in Europe, still pose a significant safety risk to the public.

“Since lockdown, we’ve become aware of an increase in the number of near miss incidents at level crossings on this line and we urge the public to stay safe, follow the directions on the signs, and get clear.”

Ian Aston, Network Rail’s level crossing manager, said: “While it’s understandable that people want to get out of the house after having been locked down for so long, it’s really important that safety doesn’t go out the window.

“Since lockdown began, there have been four times as many incidents along the Marlow branch line compared to the same time last year, so it’s vital that users pay attention, obey the signs and take extra care when crossing the railway to prevent more near misses, or worse, serious injury or death.”