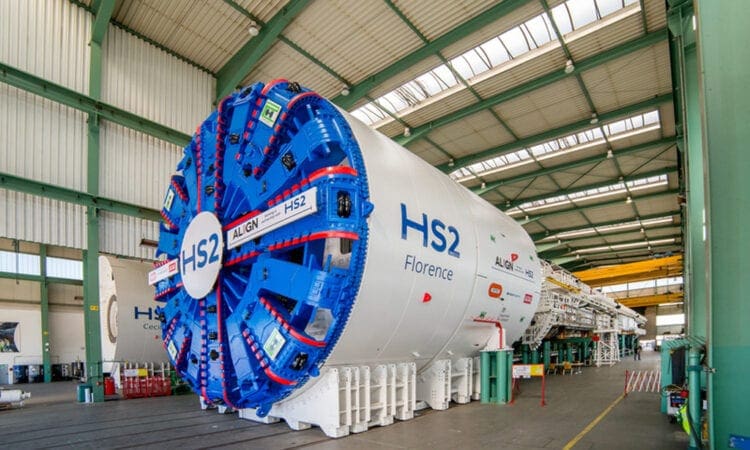 HS2 has revealed the first images of the first two completed giant Tunnel Boring Machines (TBM) to be used in the first phase of the high speed rail project.

The company has also announced the publicly-chosen names of the two TBMs that will excavate the twin-bore Chiltern tunnel on the first phase of the UK’s new low carbon, high speed railway between London and the West Midlands.

The names – Florence and Cecilia – were suggested by students at Meadow High School in Hillingdon and The Chalfonts Community College, Buckinghamshire, inspired by female scientific and medical pioneers.

Around 4,500 people from across the UK took part in the poll to select the final names, with Florence taking 40% of the vote and Cecilia a close second with 32%. The schools that suggested the names are close to HS2’s South Portal site, from where the first tunnel boring machines will launch early next year.

HS2 Minister Andrew Stephenson said: “These impressive tunnel boring machines will be instrumental in delivering the first stage of this transformative rail line between London and the West Midlands, and it is fitting that they bear the names Florence and Cecilia, two iconic women from this area whose achievements remain famous today.

“HS2 will provide better, more reliable connections that truly level up our country, boosting economic growth and sharing opportunities. I want to thank all the students who played a role in this milestone moment, and who will benefit from this high-speed railway for years to come.”

HS2 Ltd Chief Executive Mark Thurston said: “The launch of our first tunnelling machines will be a defining moment in the history of HS2 – and our work to deliver a low carbon, high speed railway that will change the way we travel in the UK.

“I’d like to thank all the schools that took part in the first stage of the competition, the pupils who suggested the three shortlisted names, and all those who voted online. It’s great to see local communities engaging with the project, and schoolchildren being inspired by the scientific and technological ambition of HS2.”

The enormous 2,000 tonne machines – which have been built by world-leading German tunnelling specialists Herrenknecht – will be shipped in pieces to the UK and arrive at Align’s main site to the west of London just inside the M25 later this year.

‘Florence’ is set to be launched early next year to begin digging the 10-mile-long Chiltern tunnel. ‘Cecilia’ will launch around a month afterwards and dig the other half of the ‘twin bore’ tunnel.

Both 170m long machines are specifically designed for the mix of chalk and flint they will encounter under the Chilterns. Operating a ‘continuous boring’ technique, they are expected to take around 3 years to excavate the 9.1m metre diameter tunnels which will be lined with concrete as they go. The TBMs will mix the spoil with water to form a slurry which will be pumped back to the main site where it will be treated before being used for landscaping on-site, removing the need for additional HGVs on local roads.

Daniel Altier, Align Project Director said: ”Florence and Cecilia incorporate the latest technology which will be essential to ensure an efficient and safe excavation of the twin-bore tunnel. This will be the first time that some of the innovations we are introducing will have been used on any TBM worldwide.

“With STEM subjects a top priority in many schools, we are delighted that local schools have had the opportunity to get involved by selecting the names and we hope schoolchildren across the UK will be keen to monitor the progress of our TBMs over the next 3 years.”

Frédéric Battistoni, Herrenknecht, Head of Project Management Traffic Tunnelling said: “It is a real pleasure to work with HS2 and specifically the team from Align, to deliver two machines that are uniquely designed to meet the challenges of constructing the Chiltern tunnel.”