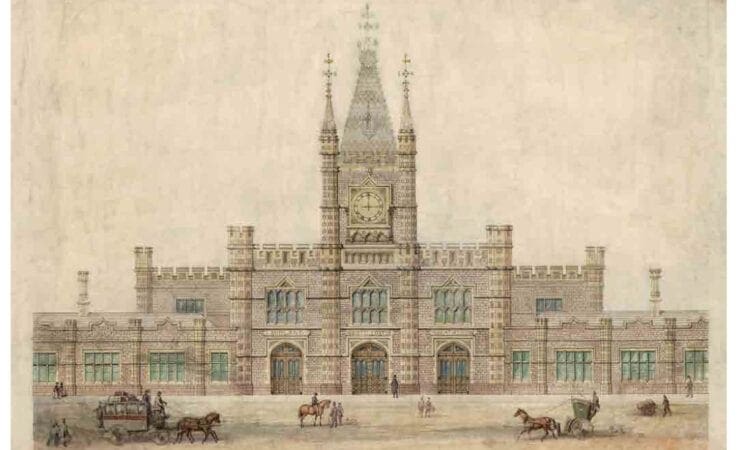 Bristol’s Temple Meads marked 180 years since the station was built with a special celebration.

Isambard Kingdom Brunel built the station in 1840 and to mark the occasion Network Rail and GWR celebrated its historic past and looked forward to a bright future as Bristol Temple Meads is set to have a multi-million-pound renovation starting later this year.

The socially distanced celebrations included historic music being played across the platforms every hour by Edward Elgar, a history talk in the Passenger Shed, which is the oldest part of the station, a history exhibition in the underpass, the unveiling of commemorative benches and a special Brunel-themed top-hat style cake.

Since the station opened on August 31, 1840 Sir Matthew Digby Wyatt, Percy Culverhouse and Francis Fox have added extensions and now Network Rail is set to transform the station with a £24m restoration of the Grade I listed Victorian roof.

The two-year programme will involve extensive metal and woodwork repairs and the complete re-glazing of the roof and platform canopies, as well as a new colour scheme.

The restoration project is part of a wider programme of work on the west’s busiest transport hub which includes the remodelling of a crucial junction just outside the station which will allow more frequent services to run in Bristol in the future.

To celebrate 180 years of Bristol Temple Meads, Brunel was joined by Tim Bowles the Mayor of the West of England, Peaches Golding the Lord-Lieutenant of the County and City of Bristol, Mike Gallop the Western route director at Network Rail and Matthew Golton the interim managing director at GWR.

Mike Gallop, Network Rail’s Western route director, said: “It was fantastic to see so many people enjoy the celebrations and it is only right that we recognise the historic past of Bristol Temple Meads and look ahead to a very bright future.

“The station has been a gateway for millions of passengers commuting to work, visiting family or going on holiday for 180 years and remains one the most iconic stations in the entire country.

“We’re now modernising the station to improve facilities for every person that steps through the doors so it can be a Bristol icon for generations to come.”

Matthew Golton, GWR’s interim managing director, said: “We really do owe an enormous debt of gratitude to Isambard Kingdom Brunel and those who followed him in helping to design one of the country’s most iconic stations here in Bristol.

“And as we reflect on 180 glorious years of history, we can also look forward to a very exciting future.

“Over the next four years this gateway to the West of England is to undergo a major transformation, delivering more train services, improving existing services and enhancing the overall customer experience not just here in Bristol, but across the wider area.”.

“The station has a long and proud relationship with the railway and has played a key role in shaping the city’s history. It is amazing to think just how much has changed since the first steam train travelled from Bristol Temple Meads on 31 August 1840.

“As station manager, I see the critical role the station plays in passengers’ lives every day and I’m excited to see the new improvements that the new station refurbishments will bring.”

Alex Hills, GWR’s Bristol Temple Meads station manager, said: “We were delighted to help support the event to mark the 180th birthday of this flagship station and what better birthday present than the exciting plans to transform the station environment.

“In addition to the project that will see the roof and canopies refurbished, along with platform enhancements for customers, we at GWR continue our work to deliver more frequent trains and better services for the city.”