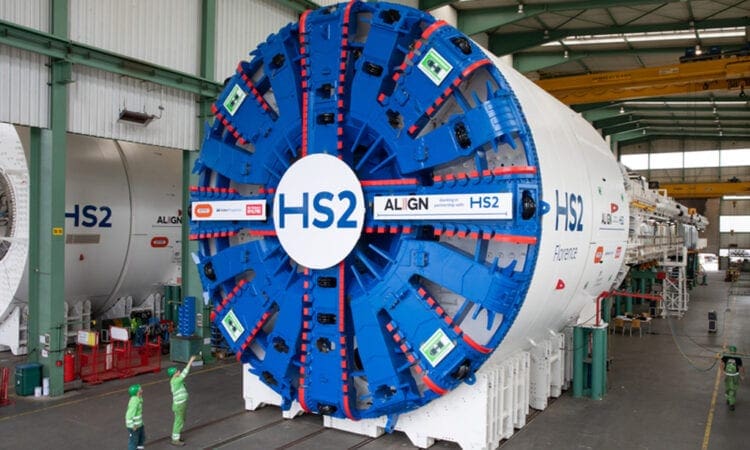 HS2’s first giant tunnelling machines have arrived in the UK.

The two 170-metre-long contraptions were transported from Germany to a construction site in Hertfordshire near the M25 in more than 1,000 parts.

They will be assembled over the coming months before they start digging the high-speed railway’s Chiltern tunnels in spring next year.

To dig the 10-mile long tunnels – the longest on HS2 – the tunnel boring machines (TBMs) will work non-stop for about three and a half years.

The two tunnels will go as deep as 80 metres below the ground to reduce the impact of the high-speed trains on communities and countryside on the route.

Their internal diameter will be 9.1 metres, providing enough space for emergency walkways on both sides of the track.

The material dug out will be converted into slurry by the TBMs, pumped back out of the tunnels and used for landscaping at the site.

He went on: “The launch of our first tunnelling machines will be a defining moment in the history of HS2 and our work to deliver a high-speed railway that will offer a low-carbon alternative for journeys across the UK.”

The 2,000-tonne TBMs were built by specialist firm Herrenknecht in Schwanau, south-west Germany, before being taken apart and shipped to the UK.

They each cost tens of millions of pounds and were designed specifically for the mix of chalk and flints under the Chilterns.

The machines will operate as self-contained factories. In addition to digging, they will line the tunnel walls with concrete segments as they move forward at a speed of 15 metres a day.

Each TBM will be operated by crews of up to 20 people working 12-hour shifts.

Senior TBM engineer James Reilly said conditions for workers will be “quite comfortable”.

He told the PA news agency: “We’ve designed our machines to make sure we have enough space in there.

“It’s not going to be too hot in there, but it will be warmer than the outside.”

Mr Reilly said “a form of social-distancing” will be possible, with one-way systems in place. Staff will wear face masks where appropriate.

The TBMs are named Florence and Cecilia following a public vote from a shortlist of suggestions by local schoolchildren.

Cecilia is named after Buckinghamshire-born astronomer Cecilia Payne-Gaposchkin while Florence is inspired by Florence Nightingale, the founder of modern nursing, who spent many years in the county.

The tunnels are part of a £1.6 billion contract handed to Align, which is a joint venture formed of infrastructure companies Bouygues Travaux Publics, Sir Robert McAlpine and VolkerFitzpatrick.

Meanwhile, activists have constructed a 30ft bamboo protest tower in the River Colne in nearby Denham Country Park.

This is in a bid to protect trees by preventing HS2 contractors building a temporary bridge at the site.

Environmental activist Dan Hooper, known as Swampy, is in the tower.

He said HS2 is “causing devastation throughout the land”, adding: “We are living in times of climate emergency and we will not stand for it.”