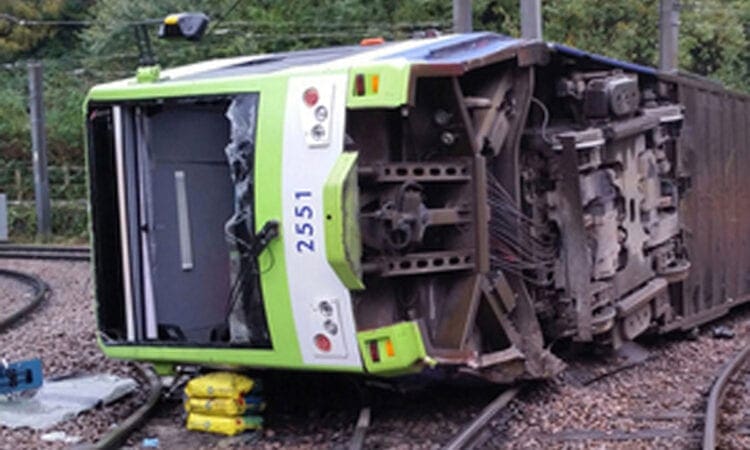 An inquest into the Croydon tram derailment in 2016 -which caused the deaths of seven people – has opened.

A further 51 people were injured when the derailment happened in south London on November 9, 2016.

The inquest was initially due to begin in October 2020, but was postponed due to the COVID-19 pandemic.

An investigation by the Rail Accident Investigation Branch (RAIB) found that driver Alfred Dorris may have been in a “microsleep” for up to 49 seconds before the tram came off the tracks on a sharp bend at almost four times the speed limit. Read the original RAIB report into the derailment of the tram at Sandilands junction.

Dane Chinnery, 19, Philip Seary, 57, Dorota Rynkiewicz, 35, Robert Huxley, 63, and Mr Logan, all from New Addington, and Donald Collett, 62, and Mr Smith, both from Croydon, were killed in the crash.

Jean Smith, mother of 35-year-old victim Mark Smith, spoke of her “relief” that the inquiry is finally taking place, but is also “dreading it”.

“It means reliving the nightmare all over again. And that’s upsetting beyond words.”

She said she hopes the process will lead to “culpability” for those responsible for “failing to heed warnings” prior to the crash.

Danielle Wynne, whose grandfather Philip Logan, 52, died in the crash, said she wants “answers on how this was allowed to happen”, as well as a law change “to prevent this from happening to any other family”.

She said the wait for the inquest to open has been “too long”.

She continued: “We’re going to get a little bit of closure. It’s going to be hard, but I know he’s up there watching down.”

Ben Posford, partner at law firm Osbornes Law – representing relatives of five of the victims, claimed they have been “badly let down” by operator Tram Operations Limited – a subsidiary of First Group – and Transport for London, which owns the network.

He went on: “Their hope for the inquest is that it will give them a better understanding, and some long overdue answers, as to why their loved ones are no longer here.

“Importantly, they also want to make sure that lessons are learned, and changes made in relation to the systemic failures and poor management culture that led to the crash, so that nothing like this can happen again.”

Mr Posford added that it was “very disappointing” that Mr Dorris has been diagnosed as unfit to attend the inquest, but the families “still hope that they will hear an apology from him”.

He was arrested at the scene of the crash, but charges of gross negligence and manslaughter were later dropped by British Transport Police.

The inquest into their deaths will be held at Croydon Town Hall and is listed for 14 weeks.