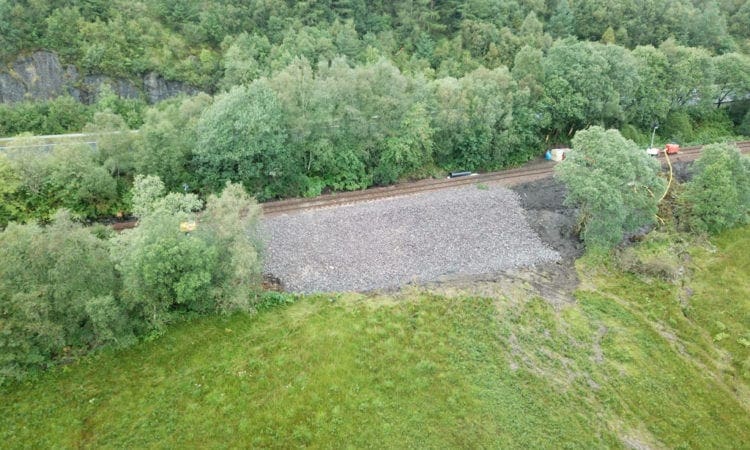 The line had been closed by ‘wash-aways’ and landslips at multiple locations around Crianlarich and Tyndrum as a result of the extreme rainfall on August 4 when around 80mm of rain fell in just a few hours onto already saturated land.

This caused serious flooding which washed away sections of ballast and embankment and overwhelmed drainage on the railway. Further heavy rain on August 9 also caused landslips which brought debris down from above and blocked the line at Arrochar.

Since the line closure, teams on the ground have worked around-the-clock to repair the damaged sites – strengthening embankments and enhancing drainage where possible and rebuilding the track-bed before reinstating the railway.

More than 3000 tonnes of rock, including 350 one tonne rock armour blocks, was delivered to site and used to rebuild and support the embankments.

Michael Matheson, Cabinet Secretary for Transport, Infrastructure and Connectivity said: “The Network Rail team have been working on site just south of Crianlarich 24-hours-a-day in order to get the West Highland Mainline repaired and have had to bring in 3000 tonnes of aggregate in what is a very difficult site to get access to.

I want to thank the workforce who have put in a tremendous effort to get this work complete.

Their dedication and commitment to getting these repairs carried out has ensured that the line has been completed and repaired early to get passenger services re-established on Monday.

“I also want to thank passengers for their patience while this repair has been undertaken.”

Alex Hynes, Managing Director of Scotland’s Railway said: “I am delighted that we are opening the West Highland Line earlier than first anticipated.  Our engineers worked around-the-clock often in challenging weather to rebuild the line and get it open as quickly as possible for our customers.

“This was a very complex series of repairs as we needed to reconstruct the slope beneath the line – replacing thousands of tonnes of lost material – before repairing the tracks above.  It was made even more challenging by the remote location but our teams have worked superbly well to get the job done safely.

“My thanks to everyone, our contractors, suppliers, train operators and freight partners for their on-going cooperation.  It’s this kind of collaboration which was absolutely vital to getting passengers and freight moving again and I’m hugely proud of the teams involved.”

The site south of Crianlarich is the last section of the line to complete repairs with sections north of Crianlarich to Oban re-opening Monday August 12 and a landslip at Arrochar, to the south, cleared and the line re-opened on Thursday, August 15.