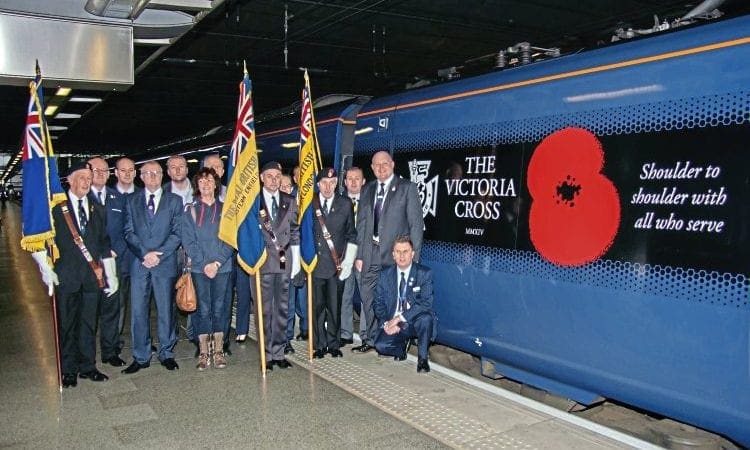 Class 395 ‘Javelin’ charter trains have raised more than £125,000 for the Royal British Legion’s Poppy Appeal. With this year’s Remembrance Day only two months away, Doug Lindsay takes up the story.

The history of these special charter trains, utilising Southeastern High Speed Class 395 ‘Javelin’ trains’, dates back to 2011, and followed a meeting of the Locomotive Club of Great Britain (LCGB) at the Ashford branch in Kent, where the speaker was Richard Dean, the then passenger operations director of Southeastern Trains.

Some time prior to that meeting UK Railtours had expressed a desire to charter a ‘Javelin’ train for a railtour around the area, visiting some lines and stations that they don’t normally visit.

However, after many attempts, there was no real progress, plus it was suggested there was no spare capacity in the diagramming of the sets – or perhaps it was there was no knowledge of what charters involved and it preferred to avoid the issue!

The 2012 London Olympics were approaching and there definitely wouldn’t be any spare sets as the Class 395s were to carry of thousands to the Games via Stratford International station.

It was at the LCGB meeting the author approached Richard Dean directly, posing the question whether it was possible to charter a ‘Javelin’ on a Saturday for a railtour of ‘unusual’ destinations for the class, being confident it would sell.

Richard said after the Olympics and once everything had settled down, he would approve such a charter request with the agreement of Hitachi and Network Rail, along with the necessary staff requirements.

With Richard’s blessing discussions began with Southeastern via one of its driver managers, who was also a volunteer on the Kent & East Sussex Railway.

Following talks, there was a site visit to the Hitachi depot at Ashford to meet the engineering staff to discuss the possibilities, followed by some route suggestions to Southeastern’s train planning staff, who were most helpful with ideas.

These ideas were put to Network Rail for rules of the route approval and other factors.