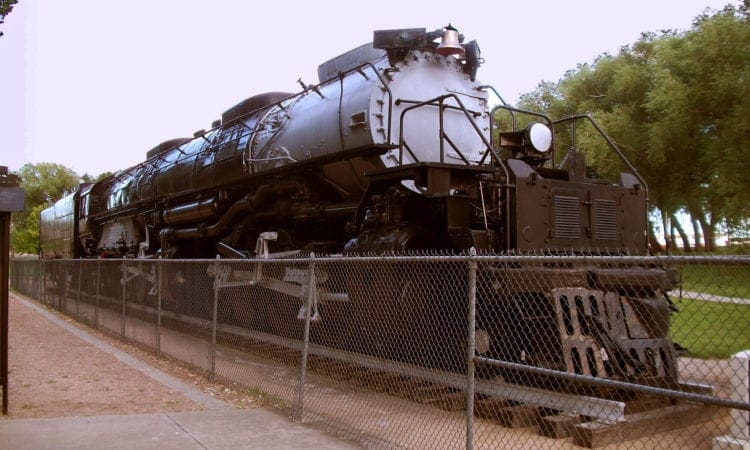 Last year, a ground-breaking five-year landmark project to restore a Union Pacific Railroad Big Boy 4-8-8-4 to working order was accomplished, with No. 4014 making a star-studded appearance at the 150th anniversary of the linking the USA’s two coasts by rail.

The world has waited six decades to see a Union Pacific Railroad (UP) Big Boy 4-8-8-4 back in action – and now No. 4014, one of eight survivors of the behemoth class, has taken over as the biggest operational steam locomotive on the planet.

The locomotives were 132 feet long and weighed 1.2 million pounds. Because of their great length, the frames of the Big Boys were “hinged,” or articulated, to allow them to negotiate curves.

Stood on its end, a Big Boy would be the height of a 13-storey building. One weighs more than a Boeing 747 fully loaded with passengers and has the power to pull 16 Statues of Liberty over a mountain. Minus the tender, the Big Boy has the longest engine body of any reciprocating steam locomotive.

By today’s standards, each Big Boy cost around $4.4 million to construct.

Why is it called the Big Boy?

According to a Union Pacific executive, the class was originally to have been called the ‘Wasatch’. However, one day while one of the engines was being built, an unknown worker scrawled ‘Big Boy’ in chalk on its front – and so the legendary name was born.

They were tested at speeds between 70 and 80 m.p.h. In regular service, Big Boys were limited to a top speed of 55 m.p.h. That is a very large mass of iron coming down the tracks at a very high speed. From the time the engineer applied the brakes, until the time the Big Boy and train came to a complete stop was between 1 to 1.5 miles

Finally, as if the 4000s weren’t big enough, the Union Pacific actually contemplated ordering five additional 4-8-8-4s that would be even larger.

As World War II dragged on, the Union Pacific needed additional power on its line to Los Angeles through southwest Utah. According to historian and artist Gil Bennett, plans were on the drawing board to build No. 4025-4029.

This third class of Big Boys was to measure 139 feet, 11 5/8 inches long and weighs just under 1.3 million pounds. All would be oil fired, instead of coal. The locomotive, itself, would be a foot longer than existing Big Boys.

The last revenue-earning train hauled by a Big Boy ended its run early in the morning on July 21, 1959. Most were stored operational until 1961 and four remained in operational condition at Green River, Wyoming until 1962.

With a confounding length of 475mm (almost 19 inches), a 5-pole motor and brass flywheel, a DCC Ready 21-pin plug, handrails made from steel wire and much more, this locomotive is unlike any other and undeniably lines alongside other models as a classic.