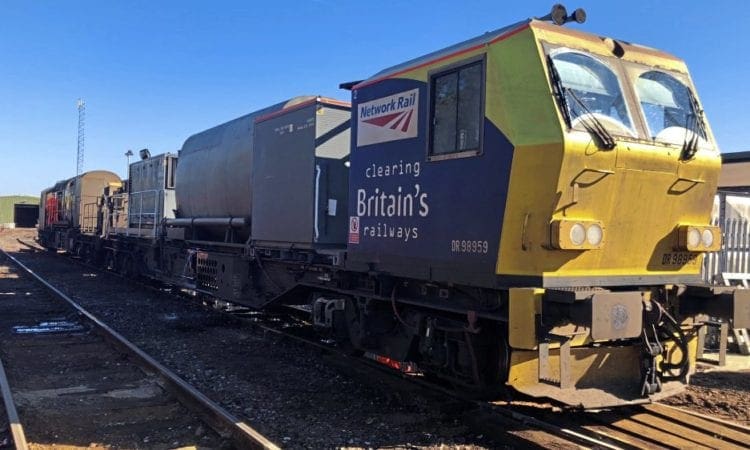 The effects of weather are a challenge for Britain’s railway, and weather conditions can severely impact the day-to-day running of train services, including leaves falling on tracks during autumn.

Autumn leaf fall causes operational problems for the signalling system and reduces trains’ grip. It can change the ability of a train to start from a station, accelerate and climb hills or stop at stations or signals.

When trains pass over these leaves, the heat and weight of the trains bake them into a thin, slippery layer on the rail. It’s said to be the railway’s equivalent of black ice.

A build-up of leaves on the tracks can also cause delays by forming a barrier between the train wheels and the electrical parts of the track that let signallers know where the trains are.

To keep passengers safe, engineers and contractors maintain, repair and improve rail infrastructure around the clock in all weathers, to make it possible for trains to run. Train drivers also brake earlier when approaching stations and signals, to avoid overshooting their stop and they also accelerate more gently to avoid wheel spin.

Network Rail are helping to tackle the challenge and keep the railway resilient with seasonal track treatment machines and vehicles ready and waiting. They will carry and deliver nearly 100,000 litres of water per circuit and water-jet the track with a pressure of 1500mb which is enough to cut through metal.

Some trains will even have equipment that applies ultra-fine dried sand onto the rail in front of the wheels which improves grip when braking or accelerating.

Rob Davis, Delivery Director, Network Rail said: “Even with the best preparation, leaves fall onto the line which can cause the same conditions as black ice on the roads. With millions of trees growing alongside the railway, it’s something the rail industry takes seriously.

“That’s why our ‘leaf-busting’ trains and front-line teams are out there 24 hours a day, seven days a week, to make sure we can get passengers from A to B safely and reliably.”

Ellie Burrows, Train Services Director, Southeastern said: “Driving conditions can be particularly difficult for our train drivers at this time of year, and just as you wouldn’t accelerate over black ice on the roads, leaves on the line pose the same danger on the railway.

“Safety is always our top priority, so our drivers have to move out of stations more slowly and brake much earlier to make sure they stop in time. This means that, in some areas, we need to put special timetables in place. We can’t risk the safety of passengers by driving trains at full speed when conditions are bad.”

This year, a ground-breaking five-year landmark project to restore a Union Pacific Railroad Big Boy 4-8-8-4 to working order was accomplished, with No. 4014 making a star-studded appearance at the 150th anniversary of the linking the USA’s two coasts by rail.