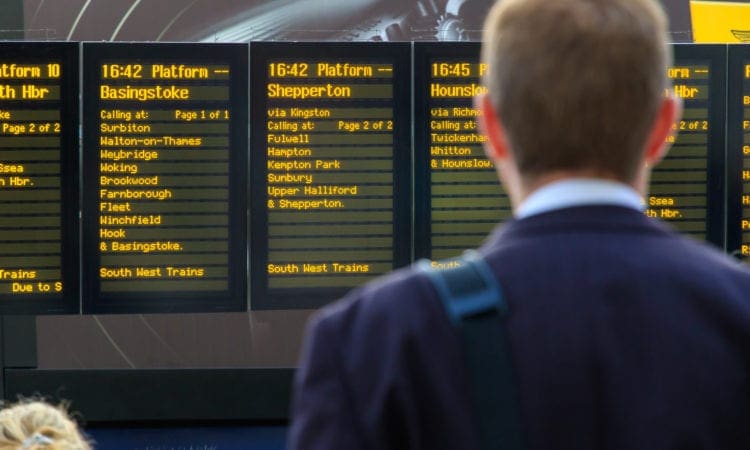 This is down nearly 10% on the figure of £10.4 billion which rail regulator the Office of Rail and Road previously calculated was the budget for the five-year period. Click here to see more.

Some 79.3% of stops at stations were made within a minute of the schedule across Britain between July and September, the Office of Rail and Road (ORR) said.

This is down from 86.4% during the previous three months. Click here to see more.

Railway worker dies after being crushed by machinery

A railway worker has died after being crushed by machinery while working at a rail depot.

The 53-year-old man from Eastleigh died after the incident at the Long Welded Rail Facility in the Hampshire town, which happened on Monday.

Paramedics were called to the Eastleigh Railway Depot at 2.50pm after receiving reports that the worker had been injured while using a piece of machinery. Click here to see more.

The Cabinet minister said he is “committed to getting Crossrail delivered”.

Writing on Twitter, he described the loan as “a fair deal for taxpayers across the UK”. Click here to see more.

A railway network has bid a final farewell to its fleet of Pacer trains after more than three decades of service.

The outdated carriage made its final Northern journey from Kirkby to Manchester Victoria on Friday.

It marked the end of more than 35 years of service – clocking 300 million miles – in the north of England. Click here to see more.

The closure of London King’s Cross station on Christmas Eve for major engineering work has been postponed from the afternoon until the end of service, to ease congestion for people making getaway journeys.

The West Coast Main Line will reopen earlier than planned on December 27, allowing a full Sunday service to run from 10am rather than midday. Click here to see more.

People planning Christmas train travel are being urged to book “as early as possible” to avoid being denied boarding.

London North Eastern Railway (LNER) issued the warning ahead of its release of tickets for the festive period on Friday.

The operator, which runs trains on the East Coast Main Line between London King’s Cross and Scotland, expects its Christmas Eve services to quickly sell out. Click here to see more.

Berney Arms in Norfolk was Britain’s least used railway station in the past year, the Office of Rail and Road said.

Just 42 passengers used the isolated station between April 2019 and March 2020.

This was down 90% on the previous 12 months as the lines serving the station were closed for most of the period due to signalling upgrade work. Click here to see more.

The Government is asking everyone to help control the spread of coronavirus by trying to reduce journeys during this new period of national restrictions. If you need to travel, for example to work, for education or other legally permitted reasons, then you can, but you should walk or cycle where possible. Please plan ahead and if possible travel during quiet times.

From Monday 7 until Thursday 10 December, there will be no service between Sydenham and West Croydon after 22:15. Use Southern Railway services, rail replacement buses or local buses.

No Night Tube or London Overground Night Service and limited Night Bus services are running. Check before you travel and plan your journey ahead of time.

See an overview of planned track closures for the next six months.

River bus services for Thames Clippers, City Cruises and Thames River Sightseeing, have returned to operating passenger service. Please plan ahead and check before you travel.

There are no new service information updates.

Some services are cancelled due to driver availability. Please leave extra time for your journey. Sorry for the inconvenience caused. Details of affected journeys can be found here.

To keep safe, plan your journey in advance, avoid travelling at busier times if you can, wear a face covering unless exempt, stay apart from others and wash your hands frequently.

National coronavirus restrictions, 5 November–2 December: Stay at home and avoid travel, except for work, education, or other legally permitted reasons.

As a result of the COVID-19 pandemic, services are now operating between 07:00 and 19:00 Monday to Saturday.

This was based on staff availability to provide a reliable service to key workers and those making essential journeys.

Due to the ongoing impact of the Coronavirus pandemic we are having to make short notice changes to our services, with effect from Saturday 7 November.