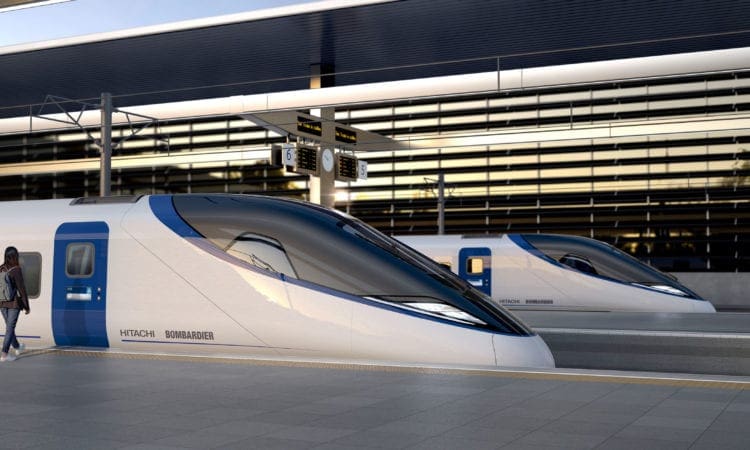 Images showing designs of HS2 trains have been released for the first time.

Manufacturers bidding to build the new high-speed rolling stock published concept pictures showcasing their proposals. The images show trains in a standard white colour as their livery will be chosen by the HS2 operator, which is still to be determined.

Joint bidders Bombardier and Hitachi claimed their design will be the “most advanced, customer-orientated train ever to run in the UK”, while rival firm Alstom described its proposal as “world class, modern and flexible”.

Siemens, which is also bidding for the £2.75 billion contract, said its offer would “set the standard for other global high speed rail systems to follow”. They are among five shortlisted bidders competing for a deal to design, build and maintain at least 54 new high-speed trains capable of travelling at 225mph.

The other bids are from Talgo and CAF. The procurement process has been run by HS2 Ltd, the Government-owned company responsible for building the railway. But the contract will be awarded by the Department for Transport, as it will own the trains once they are built.

The deadline for bidders to submit their entries was noon on Wednesday. The outcome is expected to be announced in spring 2020. The trains will be used for phase 1 of the £55.7 billion high-speed railway, which will link London and Birmingham from December 2026.

They will also serve destinations on conventional lines beyond the core HS2 network, including York, Newcastle, Liverpool, Glasgow and Edinburgh. There has been growing concern about the finances and environmental impact of HS2.

A report by the House of Lords Economic Affairs Committee last month warned it was “far from convinced” HS2 will be built within its budget.

The committee said the cost of the project could be cut by reducing the speed of the trains and moving the London terminus.

Former HS2 chairman Sir Terry Morgan has claimed the railway cannot be built to its current specification on budget.