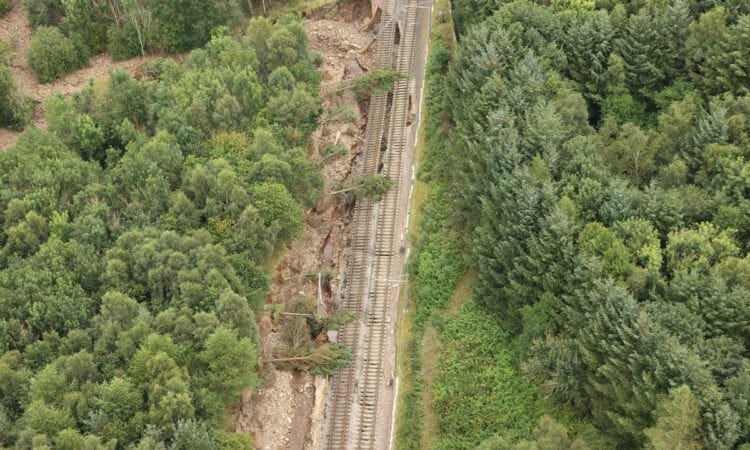 The rail industry across the UK fell silent to remember the three men who died in the Stonehaven derailment last week. Plus, there’s confusion over potential rail fare rises.

Railways fall silent to remember those lost in Stonehaven derailment

The rail industry paused to remember those who lost their lives, and all others who were affected by the derailment at Stonehaven last week.

Across Scotland, railway stations remained silent for a minute at 09:43, the time the incident was reported on Wednesday, 12 August 2020, to mark the passing of the train driver Brett McCullough, the conductor operating the service Donald Dinnie and passenger Christopher Stuchbury.

It could take months to reinstate the Edinburgh to Glasgow line as the scale of flood damage is revealed.

Network Rail will be working around-the-clock to repair flood damage on the main line near Polmont.

With the flood water subsiding from the tracks, engineers have now fully inspected the 300m section of track damaged where torrents of water cascaded from the damaged Canal above. To see more, click here.

July RPI rises by 1.6%, no decision on rail fares yet

The July Retail Price Index (RPI) – used for many years to decide the New Year changes to rail fares – has risen by 1.6%.

However, last month’s RPI rise is largely due to the higher prices for road fuel. There was confusion in parts of the media, who reported that rail fares were to rise by 1.6% in the New Year.

An announcement about any changes to fares in January 2021 is expected soon from the Department for Transport. Here’s what Rail Minister Chris Heaton-Harris had to say.

The National Railway Museum and the Gwili Vintage Carriage Group have signed a three-year overhaul agreement to bring the last surviving Welsh standard gauge locomotive back into steam.

Originally agreed in October 2019, plans to begin the overhaul of Taff Vale Railway No.28 were disrupted by the nationwide COVID-19 pandemic. However, the easing of restrictions has enabled the agreement to be finalised.

The locomotive will be based at the Gwili Railway near Carmarthen and will be overhauled onsite by the railway’s inhouse engineering team at an estimated cost of £160,000. Click here for the full details.

Helston Railway appeal to get new DMU ready for service

The Helston Railway is appealing for funds to ensure that its newly-acquired Class 127 DMU set will be ready for service in 2021.

Before the COVID-19 pandemic, the railway bought the two-car set comprising power cars Nos. 51616 and 51622, two of only six that survived in preservation.

No. 51616 – named Alf Benney after a former driver – has arrived at the railway, while No. 51622 is still at the Great Central Railway, the set’s long-time home. For more information, click here.

An emergency £360,000 appeal to help Swanage Railway survive the impact of the COVID-19 pandemic has reached £261,809 as the railway celebrates a significant milestone.

The Swanage Railway is celebrating the 25th anniversary of steam trains returning to Corfe Castle and Norden for the first time since 1967.

Swanage Railway Trust chairman Gavin Johns is appealing to the public to continue to donate to the urgent fund because the appeal needs to reach its target despite a restricted steam and diesel passenger train service returning to the preserved line. For more details, click here.

Seaton Tramway will be hosting a special event on August 28 to see all 13 trams in action to celebrate 50 years of the tramway.

Heritage trams 14, 16 & 19 that ran on the streets of London, Bournemouth & Exeter respectively will be enjoying the 6-mile round trip. Scale replica trams like our Blackpool Boat tram No 4 and our London Metropolitan car 2 will also be making their way through the Axe Valley.

The entire fleet of trams will be in operation across the day of August 28 as the tramway celebrates their anniversary. Seaton Tramway has made its home in Seaton for half a century, starting with the acquisition of the closed railway line in 1969. Click here for more details about the anniversary.