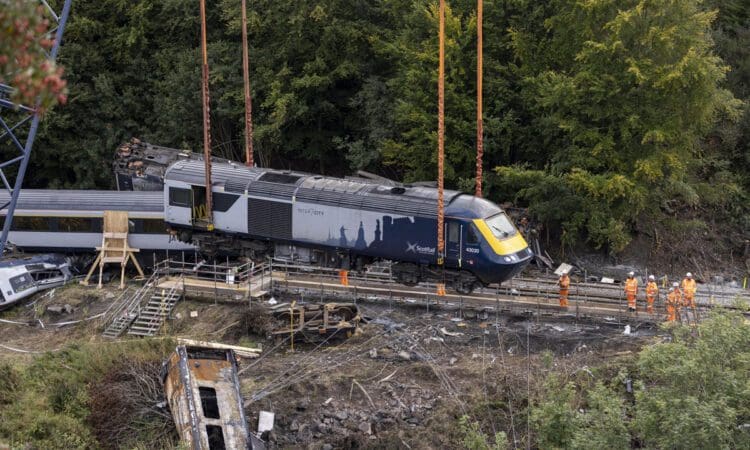 Silence for victims of Stonehaven rail disaster one year on

A minute’s silence has been held for the victims of the Stonehaven rail crash one year on from the disaster.

The train drivers’ union Aslef said the ScotRail derailment, which claimed three lives on August 12 last year, will be silently reflected upon by workers on Thursday morning.

Driver Brett McCullough, 45, conductor Donald Dinnie, 58, and passenger Christopher Stuchbury, 62, died when the 6.38am Aberdeen to Glasgow Queen Street train crashed into a landslide across the tracks near Stonehaven, Aberdeenshire, following heavy rain.

Flower beds at Stonehaven railway station have been destroyed on the first anniversary of the train derailment that killed three people.

The “deplorable act of vandalism” came just hours before a memorial plaque was unveiled at the Aberdeenshire station and a minute’s silence was held in tribute to the victims of the crash on Thursday.

British Transport Police is reviewing CCTV and Scotrail said it will work to “ensure that those responsible are brought to justice”.

Images on social media show brightly coloured flower pots in tatters and flowers strewn all over a platform at the station, with Scotrail saying the vandalism happened late on Wednesday.

The Railway Benefit Fund (RBF) has announced that Sir Peter Hendy, Chairman of Network Rail, is to become an Honorary Patron of the charity.

As Patron, Sir Peter will support the RBF in its fundraising efforts and help to raise awareness of the charity’s crucial work in the rail industry.

The first meeting of the Accessible Travel Advisory Group (ATAP) – set up to improve the accessibility of rail journeys on the Southeastern network – took place on August 5.

Chaired by former Paralympian Andy Barrow, the ATAP is made up of 15 members with a lived experience of accessibility issues.

Mr Barrow was joined on his journey into central London on a Southeastern train by the Rail Minister, Chris Heaton-Harris, whose remit includes the accessibility of the railway, and David Wornham, from Southeastern.

Rail enthusiasts get married on train from London Euston

A couple of rail enthusiasts enjoyed a “dream come true” wedding as they tied the knot on an Avanti West Coast service.

Laura Dale and Jane Magnet, from Surrey, were selected out of more than 150 couples who entered a competition to win a wedding on the train.

The couple hoped to get married nearly two years ago but were delayed by a combination of the COVID-19 pandemic, finances and logistics.

When their special day arrived on August 10, the couple were given a champagne reception at London Euston before boarding a Pendolino carriage decorated with flowers.

The pair walked down the aisle and were wed by Avanti West Coast train manager and ex-clergyman Peter Davis.

The nine-mile Great Central Railway (Nottingham), which aims to eventually become the northern ‘half’ of a heritage main line steam highway between the city and Leicester, officially changed its name to Nottingham Heritage Railway in July.

A statement said: “The new GCR(N) board has decided to rebrand the railway as the Nottingham Heritage Railway, effective immediately.

“We felt that it was time to freshen up the railway’s image, and the new name is more inclusive and reflective of our strong links with the City of Nottingham and the Rushcliffe area.”

Warley Model Railway Club has announced that the Warley National Model Railway Exhibition 2021 at the NEC has been cancelled due to COVID-19.

Despite the lifting of restrictions, the ongoing perception of risk means there are too many uncertainties to deliver the event in 2021.

The exhibition team’s decision was to cancel this year’s exhibition and rebook for 2022 in the hope that things are more positive in the model railway world.

Our transport network has never been cleaner. Since September, Imperial College London has run monthly tests for coronavirus on the transport network and found no trace. You can read their recently published report.

You must continue to wear a face covering over your nose and mouth at all times when on the transport network, unless exempt. The overwhelming majority of people are complying with this requirement, and the British Transport Police, the Metropolitan Police and our own officers are on the network to check compliance. Fines of up to £6,400 exist for anyone who does not comply.

Please also wash or sanitise hands before and after travel.

Due to the coronavirus, the following service changes will be in place until further notice. Please plan ahead and check before you travel.

Bakerloo Line: Minor delays between Queen’s Park and Harrow & Wealdstone due to train cancellations. GOOD SERVICE on the rest of the line.

Metropolitan Line: Minor delays between Aldgate and Uxbridge due to train cancellations. GOOD SERVICE on the rest of the line.

England has now moved to the next step of the Government’s Roadmap out of Lockdown. The main change from Monday 29 March is that ‘Stay at home’ regulations have been lifted. Further details can be found on the Government’s COVID-19 Response – Spring 2021 page.

There are no incidents reported.

Stagecoach Supertram, SYPTE and Tramlines have issued travel advice for visitors to the Tramlines festival taking place this weekend (Friday 23 to Sunday 25 July).

A normal tram service is planned to continue to run throughout the day on Friday, Saturday and Sunday in the area so people can travel to the venue and others can make their journeys as normal.

However, a joint decision has been made between Supertram, SYPTE and Tramlines not to run evening trams in the area of the festival on Friday, Saturday and Sunday evening. All services will terminate at Shalesmoor from around 9 pm on Friday and Saturday and 8 pm on Sunday. This is because Supertram has reduced staff resource at the current time, primarily due to a surge in employees being contacted with a self-isolation instruction through the NHS Test and Trace system.

The Subway is running as normal.